Court 13 friend Cary Fukunaga recently paid us a visit here in New Orleans, and between the racquetball and the Cajun food, also found time to premiere his new feature, “SIN NOMBRE.” A nearly packed house gathered at Canal Place on the opening night of May 8, to watch the film and stick around for the Q & A Cary held afterwards. A picture from the premiere of Court 13ers (from left to right) Josh, Michael, Dan, and Justin, with Cary in the middle, below a somewhat silly marquee: 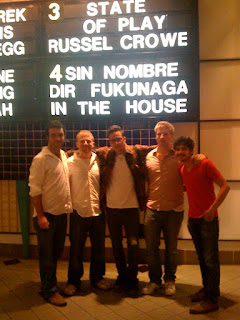 Cary came into the Court 13 world somewhat serendipitously; when we were in the last of 4 legs of production on “GLORY AT SEA,” he and 3 blessed friends from NYU came down to help us finish it. Cary was the Director of Photography for the underwater sequences, and, with risk of tooting our own horn, we think he did a pretty good job to say the least.

“SIN NOMBRE” is the story of a young Honduran girl making the dangerous trip from her homeland to the United States, via the trains of Mexico–where she meets an exiled member of the deadly Mexican gang Mara Salvatrucha 13, on the run himself. Besides being visually stunning, the film has an attention to the detail of the reality it depicts that is based in anything but conjecture; Cary went down to Mexico and actually rode these often hijacked, gang-ridden trains himself.

Everyone should see this film, and not just because we’re friends with Cary. It’s one of those movies that sheds light on an experience that would otherwise never infiltrate most people’s consciousness; it breathes visual life into subject matter that we rarely hear about, and when we do it’s relegated to the words of print journalism or pundit talk fests. But right now, it is (probably) playing at a theater near you. Do your darndest to go see it.