Just when one might think “GLORY AT SEA” had exhausted its world tour, the kind folks at the Middle East International Film Festival accepted us into their blinged out arms. Court 13’s Benh Zeitlin and Viktor Jakovleski were cordially invited to decadent Abu Dhabi for the festivities, where Benh claims it rains inside a mall, and the hotel toilet flushers are solid gold. Recession be damned. 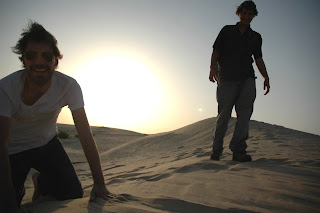 A world-class festival, headquartered at the lavish Emirates Palace Hotel, the MEIFF gave Benh and Viktor a chance to see top notch short films in the finest of theaters, dine and comiserate with film friends new and old (ie long lost Court comrade Kellanas Quinn and veteran Boogie Club founder Jamie Dutcher), and generally pretend like they were heirs to an imaginary fortune.

Then Benh came home to New Orleans, where he lives with a pig, drinks Miller High Life, and uses a rusty old bike to get around.